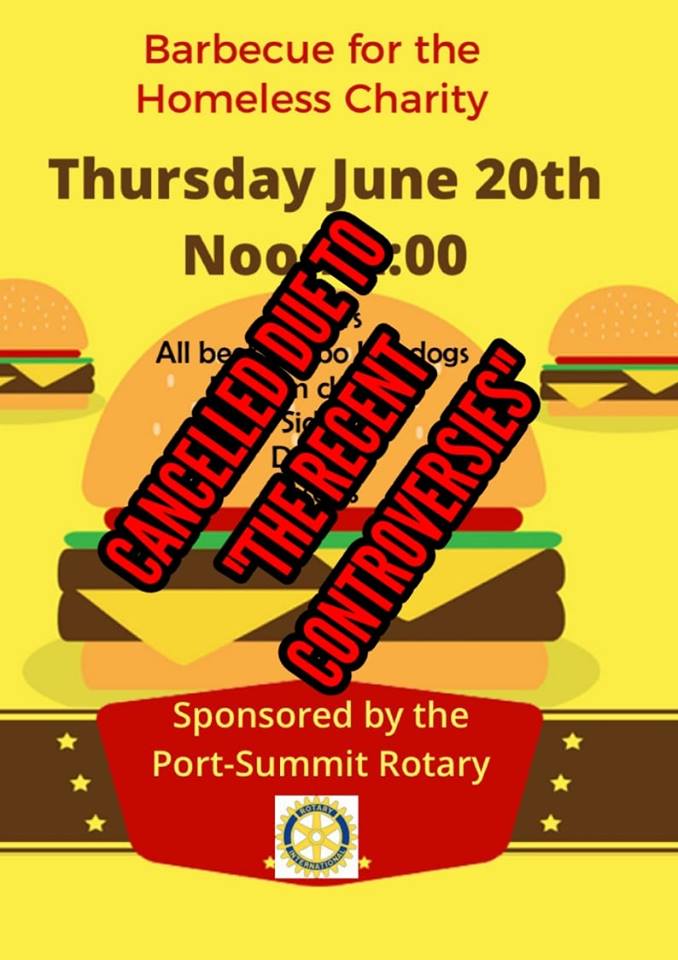 Many of the difficulties of this work just roll off my back. They don’t make me angry.

I don’t think I even had a minute where I was angry towards the woman who burned down our porta potty and caused $5000 worth of damage.

A tenant called the cops on me yesterday for going into his office to show it to another tenant even though I gave him 3 days notice. He owes me about $1500 in back rent. The cop just walked out. I wasn’t mad at that.

I’ve had a table thrown at me. I’ve been punched in the face. I wasn’t mad at either of those people.

So many things have been stolen from our facility I can’t even begin to make a list of them. I’m not mad.

This gets under my skin.

The Portage and Summit County Rotary clubs have been organizing a cookout for the homeless for several months. It was scheduled for next week.

Last night we got notice that they are canceling the event due to the “recent controversies.”

Was it the controversy of us running an illegal campground for the homeless for 2 years?

Was it suing the city for the right to shelter the homeless?

Was it the house we bought from the Land Bank and then as soon as the paperwork was done we got notice from the city that it was condemned?

Was it the op-ed the mayor did telling everyone that I’m an idiot?

Or perhaps it is that I supported two homeless men for holding a protest camp in a park because the city repeatedly threw them out of the remote camps they quietly tried to exist in?

Which “recent” controversy pushed them over the edge?

At what point was it that they decided we had gone too far and now they must punish the homeless further by taking away the cookout they had been planning for the last couple months.

People running away from me is nothing new. And they love to do it by telling me that if I don’t change my position they will have no choice but stop supporting us financially.

They love to threaten me with the risk of losing their precious money.

That’s always amusing to me considering it shouldn’t take a particularly astute observer to recognize I am not in it for the money.

Every time someone chastises me for “going too far” because I dared stand up to a machine that oppresses and criminalizes the poorest and weakest among us I immediately think about all the people that must have scorned actual brave heroes from our history.

The White Rose (German: die Weiße Rose) was a non-violent, intellectual resistance group in the Third Reich led by a group of students and a professor at the University of Munich. The group conducted an anonymous leaflet and graffiti campaign that called for active opposition to the Nazi party regime. Most were in their early twenties. Three were executed by guillotine.

Hermine “Miep” Gies was one of the Dutch citizens who hid Anne Frank and her family.

Oskar Schindler was a German industrialist and a member of the Nazi Party who is credited with saving the lives of 1,200 Jews during the Holocaust.

John Brown was an American abolitionist who advocated the use of armed insurrection to overthrow the institution of slavery in the United States. (We have the John Brown house right here in Akron.)

Dorothy Day was a political radical who established the Catholic Worker Movement, a pacifist movement that combines direct aid for the poor and homeless with nonviolent direct action on their behalf. She practiced civil disobedience, which led to additional arrests in 1955, 1957, and in 1973 at the age of seventy-five.

Would the Rotary have stood up for those people? Or would it have been too controversial?

I have had several people in high positions tell me that they support me privately but they can’t support me publicly. Then what is the point of supporting me at all? What is the support worth if it is in theory only?

At what point does human rights abuse become so severe that finally someone stands up and says I can bare it no longer. I will stand with the people who have been abused.

My observation is that there is no line. There is no amount of torture and abuse of fellow human beings that will make people finally straighten their moral backbone.

About the residents that lived next door to Dachau Nazi Concentration Camp:

Although the population as a whole realized the utter bestiality of the SS and the nauseating occurrences beyond the barred gates of the Camp, they were afraid even to say anything – much less do anything – because the shadow of the Camp hung over them as well.

And that gets to the heart of the matter. These people are afraid.

They aren’t afraid for their lives, mind you. They are afraid for their money. What if the Akron Democrat Machine turns on them? What if they are no longer in favor of the power mongers of Akron? If there is even a remote possibility that they could lose some money, the cause will always take a back seat to the money.

People very close to me tell me that I am acting against the interests of my family by helping the homeless. “How could you even think about helping someone that isn’t your family?”

WHO THE FUCK ELSE IS GOING TO DO IT?

People cower and hide like mice in the floorboards of a rotten shed.

They keep their heads down while great atrocities go on right outside their doorways.

What have we become as a species? Who are we? What do we stand for?

Is our own personal gain the entirety of it all? “I got mine and mine is all that matters.”

THIS is what makes me angry.

Tweet
Pin
Share119
119 Shares
The best way you can support the work we do at The Homeless Charity is by becoming a Patron for as little as $1/month. It shows the government people care about the homeless and it helps us manage our budget a lot easier. Please click here: Become a Patron!

2 thoughts on “CANCELLED DUE TO “THE RECENT CONTROVERSIES.””